The popularly called Small Skyscraper was built in 1939 according to the project by a young architect Raoul Puhali, who was also the commissioner.

Raoul Puhali was born in Pula in 1904, from where he soon moved to Rijeka where he lived and worked after the studies in Vienna. After the Second World War, he lost all his property, which is why he moved to Trieste where he remained for the rest of his life. The Small Skyscraper is one of his first works, while some of his other works include the INPS skyscraper in the Battista Street in Trieste, the skyscraper in the XX Settembre Street in Trieste (today Cinema Nazionale), the aqueduct in the city and others.

The Small Skyscraper is one of the few edifices in Rijeka built on a specific triangular ground (e.g. Casa Nave, Dopolavoro). The working title of the edifice casa d'abitazione all'angolo (residential house on the corner) appeared already in the first designs. It was built as a residential skyscraper with business offices on the ground floor, central heating, warm water and two elevators. There are two apartments per floor on the first eight floors, while the last two floors have only one apartment each. The tenth floor should have contained a cylindrical ending with a spiral staircase; however, that part has never been realized.

The balconies particularly contribute to the attraction of the building, mitigating the sharp angle of the ground; they visually elongate it and with their exchange of light and shadow, they provide a special rhythm to the skyscraper. Today still in full function, it is considered as one of the jewels of Modernism in Rijeka and has become a spatial reference point. 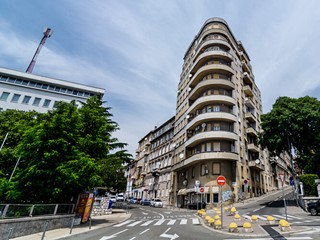